Individual exemption from being voted against at Tribal Council.

The Immunity Necklace is awarded to an individual, or sometimes multiple individuals, who have won an Individual Immunity Challenge post-merge.

Similar to the Immunity Idol that grants a group of Survivors exemption, the Immunity Necklace grants one individual safety at the next Tribal Council. Ownership lies solely with the winner and cannot be stolen by another, unless the winner decides to give up the necklace.

Typically, the Necklace will fit with the motif of the season, with some tribal design or small tiki attached. Other designs include feathers, tiki heads, skulls, and even teeth. A winning contestant will wear the necklace at Tribal Council around their neck to indicate their exemption from being voted against. 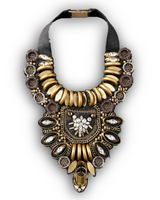